The American Kennel Club names this dog “saucy” for good reason: these dogs have a lot attitude, considering their small size.

1. They come from Mexico.

It is believed that Chihuahuas are members of an old race, the Techichi.  Toltecs in Mexico preserved these pups in the 9th century as lap dogs.

2. Christopher Columbus possibly may have brought them to Europe.

Experts know that little dogs come from Mexico, but the journey they have traveled to Europe is less evident.  Christopher Columbus, who sent the King of Spain a letter that refers to the little dogs.  There’s a possibility that he brought some of the pups from his journeys.

3. Chihuahuas have shrunk over time.

Perhaps much bigger than the one we see now was the early iteration of the breed.  The breed shrank in size after having been crossed by a tiny hairless dog from Asia, possibly a Chinese crest that crossed the Bering Strait into Alaska.

Like human children, chihuahuas have a soft spot called a molera on their heads.  But a chihuahua can have the spot for their entire life, unlike infants.  The degree, biology and skeletal nature are all factors of if a chihuahua keeps the soft spot or not.

5. They have two different types of head shapes

Chihuahuas may have heads in the form of an apple or deer.  Chis with a shorter head have a broader snout and are deer-headed.  A dome shape is more likely for the apple-headed ones.  They are both cute, but the AKC prefers show dogs to be apple shaped.

Chihuahuas have the largest brain in the world of dogs in terms of their bodies.  You can train them fast and efficiently.  However, because of a short bladder and an eager attitude, they’re not easy to housebreak.  They don’t care so much for the rain or cold as they are desert dogs.

7. Chihuahuas are not ones to mess with.

They’re tiny, so they’ve got a little bit of a Napoleon complex.  There is specific research that also found that smaller dogs are some of the most aggressive breeds towards humans and dogs outside of their breed.  In order to avoid this, owners are encouraged early on to have them around other dogs and people.

8. The smallest dog in the world happens to be a Chihuahua.

With just six inches from her nose to the end of her tail, Brandy, is the world’s smallest dog.  The biggest living dog in the world is more than 7 feet long.

9. Chihuahuas are known to shiver quite a bit.

You may notice a chihuahua shaking and shivering. This can be due to a few factors such as them being cold (their small size allows them to get cold easily), their temperament, separation anxiety, etc. 8 of the Healthiest Dog Breeds 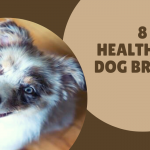